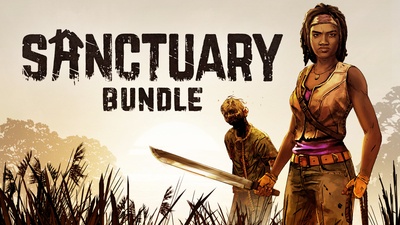 Welcome back! Today we are going to be talking about another upcoming giveaway on GG Players, the Fanatical’s Sanctuary Bundle Games, which boasts a lot of different games. As the website says itself, this is truly the “ultimate lockdown bundle”. With some popular games in here, we noticed that there were also some more!

Honestly, The Walking Dead Telltale franchise has to be one of the most popular ones out there. Telltale, as a company, was known for their narrative game design. The gameplay is driven by the decisions you make, which means the lives of characters are put into your very hands. This bundle not only gives us one of these games, but offers three:

In these games, you’ll take control of one or more characters in a fight for your life. You’ll be spending most of your time wandering around, trying to find resources, escaping dangerous situations with quick-time events and making devastating choices. Cinematic sequences are also really fun to watch in the comic-art style.

This first person shooter game falls into the same category as Doom, a game that’s very well known for being fast-paced and chaotic. This game definitely gives off the nostalgic 90’s vibe with the graphics, which you don’t really see anymore.

You’ll be going through a ton of locations, namely haunted mansions, castles, graveyards and other places. We promise that you will be constantly engaged with the constant environmental changes, which makes it so fun to explore your surroundings while destroying anyone that stands in your way. You actually start off with a flare gun. This isn’t exactly what comes to mind when you hear of a shooter, but it’s oddly satisfying to see your enemies get roasted… Literally.

According to several reviews, the level design of Blood: Fresh Supply is quite well praised. Enemies are unpredictable, able to come individually or in big groups, so you’ll have to constantly be on guard. Furthermore, there’s even an online multiplayer mode you can play with friends. However, you have to understand that there might be a few issues with lag or performance, as this game had to be ported to another platform.

This War of Mine (Multiple Installments)

This War of Mine has quite unique gameplay mechanics for a game set in an apocalypse. Essentially, it’s a 2D The Similarly to the Walking Dead franchise mentioned earlier, this bundle has two games from This War of Mine available:

As PCGamer’s review so adequately puts it, this game is like a “grim version of The Sims”. You get to controller characters by making them perform different actions, like scavenge, build, prepare food and more. You can also trade and barter with other survivors.

The game has a multitude of locations, each with their own respective loot and enemies lurking around. There’s always this tension lurking in the air, as guns and ranged weapons are hard come across, which adds to the uneasiness. Lastly, this game is also quite story driven and the gameplay adapts to your decisions. Morale is a huge factor here, so don’t turn away too many families or dying survivors who request your help.

Redeemer: Enhanced Edition is an action-packed top down game, where you have to fight through levels. It kind of reminds us a little bit of Mortal Kombat, due to the brutal ways you can slaughter and take down your foes. You can use your surroundings to your advantage, as throwing enemies and punching them through walls is all very much possible.

The combat system is the star of the game. You have to look out for the optimal time to counter enemy attacks, while dodging and making sure you don’t get yourself cornered. All enemies aren’t the same though, so you can’t just repeatedly spam a button and expect to be victorious. As you progress further through these levels, you unlock new abilities to add to the mayhem. To top things off, there’s even a co-op mode.

We haven’t covered all of the games in this bundle. So if you’d like to see what else is available or purchase the bundle, please click the button below:

Once again, if you’d like to be kept updated on the status of current giveaways and any upcoming ones, please check out our social media. GGPlayers posts regular updates on Facebook, Discord and Steam Groups!

With all this being said, please remember to stay safe during this pandemic. Playing games can definitely make the time pass by quicker if you ask me!